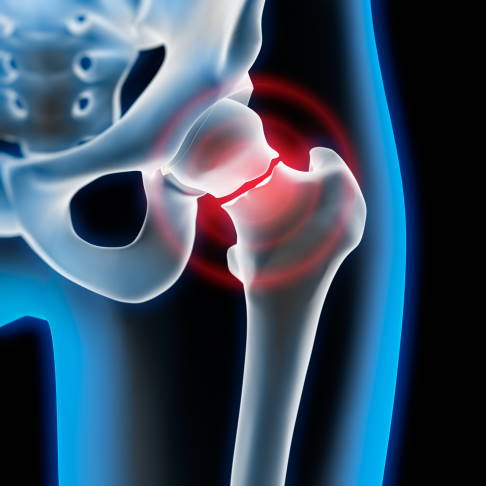 The femoral neck connects the thigh to the hip joint. Osteoporosis reduces bone density and increases the chance of fractures in the event of a fall. © peterschreiber.media, Adobe Stock

Falling onto the hip joint can easily cause a femoral neck fracture, particularly in seniors. This results in a fracture at the bony junction between the femoral shaft and the spherical femoral head.

A femoral neck fracture is determined by the orthopaedic hip specialist. A femoral neck fracture can be accompanied by damage to the cartilage, ligaments and joint surfaces in the hip joint and require an accurate diagnosis to prevent long-term damage such as osteoarthritis of the hip (coxarthrosis), necrosis of the femoral head and chronic hip pain.

What is a femoral neck fracture?

Femoral neck fractures are among the most common injuries in adults over 65 years. They are typically caused by a fall that follows a trivial incident such as tripping on the pavement or in the home. Pre-existing osteoporosis further increases the risk of a femoral neck fracture after a fall.

The fracture can cause severe stabbing pain in the hip after the fall. In some cases, the femoral neck does not break completely or the strong muscles in the thigh still hold the fragments together.

For the elderly, a femoral neck fracture is often a dramatic event with a high risk for complications during the healing process. The mobility and independence of the injured person often decline significantly after a femoral neck fracture. Often patients cannot even manage short distances, become bedridden and decline physically and mentally. The mortality rate of seniors also increases considerably.

How can I prevent a femoral neck fracture?

Active seniors with a good fitness level often fall with no consequences. The best prevention against fall injuries to the hip joint is therefore regular physical activity and well-trained hip muscles.

For the elderly it's particularly important to take underlying conditions which could cause a fall into account. Common causes are cardiovascular problems and dizziness. You should also have your vision checked regularly, as good eyesight allows you to see obstacles and can prevent falls that cause a femoral neck fracture.

A diet high in calcium and vitamin D helps maintain a stable bone structure. Abstaining from alcohol and nicotine is recommended in the interest of good bone density. Age-appropriate facilities, grab rails in the bathroom and aids such as canes and grabber tools further reduce the risk of falls that cause a femoral neck fracture.

Symptoms of a femoral neck fracture

If a femoral neck fracture is treated shortly after the fall, the physician can typically prevent chronic progressions and severe osteoarthritis of the hip (coxarthrosis).

In the case of late treatment, the function of the hip joint will probably deteriorate continuously: at first, hip pain only arises with strain, later the pain becomes part of everyday life and becomes chronic.

The affected person often suppresses these episodes of pain until the hip joint shows chronic inflammation (inflammation of the hip joint, coxitis). Early diagnosis and treatment of a femoral neck fracture is therefore very important.

Diagnosis of a femoral neck fracture by the hip expert

If pain arises in the hip joint after a fall, an evaluation by an orthopaedic hip specialist is strongly advised. After all, a femoral neck fracture does not necessarily cause you to immediately be unable to walk. It first seems the leg can still bear weight, but the patient can no longer raise it actively. It may also merely be twisted with mild pain, as the strong ligaments and muscles in the hip keep the bone fragments together tightly.

Only a physical examination and X-rays by a specialised orthopaedist will provide assurance and information on the exact location of the fracture.

The femoral neck can break in different areas: directly below the femoral head (subcapital), in the middle (transcervical) or toward the side (lateral). © bilderzwerg, Adobe Stock

Treatment and care of a femoral neck fracture

Orthopaedic treatment is based on numerous specific circumstances the hip specialist must consider. The exact type of the fracture, the physical condition of the patient and their muscles, weight, biological age, and underlying conditions such as osteoporosis are key in determining treatment.

The goal of orthopaedic treatment is for the physician to quickly stabilise the fracture and spare the often older patient long periods of complete immobility. Depending on the location of the fracture, osteosynthesis will fix the femoral neck with plates and screws or the femoral neck will be replaced with a hip replacement (hip TEP).

When do we recommend osteosynthesis?

Although conservative or hip-preserving treatments seemingly avoid surgical risks, they are not without risk. The site of fracture can shift again whilst healing (dislocation). A so-called false joint can form. Elderly patients can develop bedsores due to the long healing time. Even with conservative healing, the bone can die if blood vessels die off due to the type and position of the femoral neck fracture and if the supply to the bone in the hip joint is interrupted. This is referred to as femoral head necrosis.

In most cases, the orthopaedist will decide to operate on the femoral neck fracture. We decide between femoral head-preserving treatment and femoral head-replacing procedures.

A hip replacement allows the patient to recover from the consequences of a femoral neck fracture the quickest. With a hip replacement, the patient can already place weight on the leg the day after surgery. It does not require a long period of bed rest. Immediately following the hip replacement surgery the patient starts physiotherapy exercises to regain mobility.

A femoral neck fracture is particularly treated with an endoprosthesis in elderly patients (> 65 years). In some cases, a partial replacement will suffice. If the hip joint shows signs of osteoarthritis of the hip, the method of choice is a full replacement.

Aftercare is a crucial part of the healing process. Depending on the type of fracture and the patient’s physical and general condition, the hip specialist would develop a tailored plan for therapy and mobilisation. 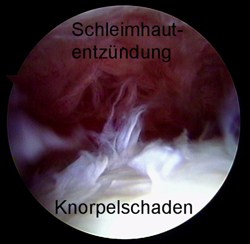 Image of an inflamed joint capsule in the hip. Arthroscopy shows extensive cartilage damage and inflammation in a patient with a femoral neck fracture that was discovered late. © Gelenk-Klinik

In addition to hip arthrosis, the late consequences of an inadequately treated femoral neck fracture may include the femoral head dying off (femoral head necrosis), the development of leg length differences with changes in gait pattern, or chronic, severe pain in the hip.

Not only fractures of the femoral neck have drastic impacts on the life of the patient: injuries to the soft tissue such as cartilage, ligaments and the labrum of the hip concerned can drastically limit the quality of life for many years.

Falling onto the hip can cause the cartilage in the hip joint to tear. The increased friction in the joint causes excessive cartilage wear and later on osteoarthritis of the hip. Traditional diagnostic X-rays do not detect cartilage injuries. Only modern procedures such as hip arthroscopy and MRI, allow the orthopaedic specialist to detect injury to the cartilage and the joint surface.

Early mobilisation is particularly important in the aftercare of femoral neck fractures. It's important for the patient to quickly regain independence. With the support of experienced physiotherapists, Gelenk-Klinik patients will therefore already sit on the edge of the bed and be mobilised the first day after surgery.

If the patient is fit, they can even walk their first steps. Here we distinguish between partial and full weight bearing, depending on the type of surgery. For young patients receiving osteosynthetic treatment, we typically recommend partial weight-bearing for up to six weeks. In addition, exercises for thromboprophylaxis to stimulate metabolism and maintain muscles are important for healing.